Mehendi or Henna used in India is derived from mehendi plant which is scientifically known as Lawsonia Inermis and is popularly called the henna tree.
Indian marriages are known for their many rituals. In fact, the beauty of Indian weddings comes forth in the numerous traditions that are associated with the special celebration. Indian weddings are incomplete without dance, music and lots of laughter. Furthermore, Indian weddings are not a one day ceremony. Pre-wedding ceremonies begin before the wedding and can sometimes be a week long celebration.

Among the many traditions that are infused into Indian weddings, one of the most prominent is the mehndi ceremony. This is the day when mehndi is applied on the hands and feet of the bride and even the groom. While the bride has a very elaborate pattern done on her hands and feet, the groom usually has just a token design. Mehndi is a very important part of both Hindu and Muslim weddings in India. In fact, application of mehndi is a custom during any celebration in India, be it Karva Chaut, Teej, Diwali, Ramzan or any other festival.

Beliefs associated with mehndi
It is a common belief that the darker the color the mehndi leaves on the hands on a bride, the more will she be loved by her husband and mother-in-law. However, the significance of applying mehndi during weddings is not restricted just to sentiments and beliefs. Although these beliefs make the application of mehndi a much anticipated and charming tradition, the actual reason is of much deeper significance, which is sometimes forgotten in the present day. 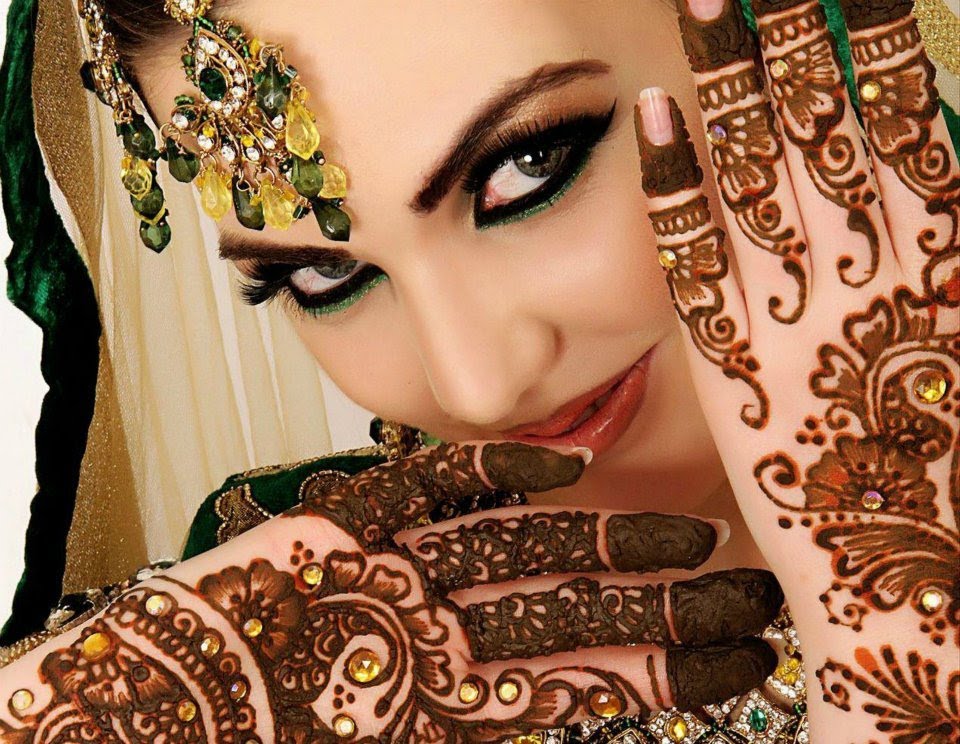 Core significance
Besides lending color to the hands, mehndi is a very powerful medicinal herb. Weddings are stressful, and often, the stress causes headaches and fevers. As the wedding day approaches, the excitement mixed with nervous anticipation can take its toll on the bride and groom. Application of mehndi can prevent too much stress because it cools the body and keeps the nerves from becoming tense. This is the reason why mehndi is applied on the hands and feet, which house nerve endings in the body. Also, being a highly antiseptic agent, mehndi can protect the couple from viral diseases. Such diseases are totally undesirable just before the wedding and this medicinal herb can lend a strong shield. Any small cuts, burns or scratches that the couple might sustain during the course of so many rituals and customs can be healed easily with the application of mehndi. It improves blood circulation in the body and enhances general health. The initial practice of applying mehndi in ancient times began in order to protect the couple and keep them healthy. 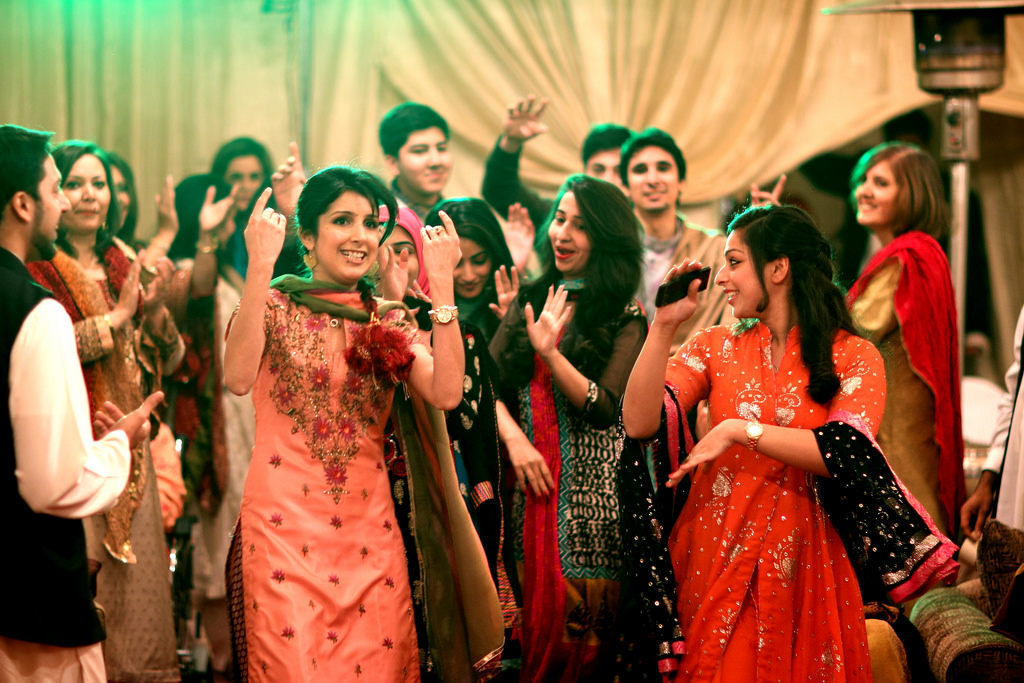 Mehndi that is applied during Indian weddings is not just a plain paste of mehndi powder and water. Eucalyptus oil, a bit of clove oil and a few drops of lemon are added. These oils not only help in darkening the color of mehndi on the body, but also enhance the benefits of mehndi and make the paste highly medicinal. The best part is that the smell, the beautiful rich color and the health benefits that mehndi lends act as a powerful aphrodisiac. Also, since the color and smell remain for days, it boosts the romance in the initial days of wedding.

Islamic belief is also very strong regarding mehndi and its application during weddings is a very significant part of Islamic weddings as well. According to holy Islamic scriptures, the Prophet always administered mehndi application and as a drink to people suffering from diseases. So, it corresponds to the Hindu ideology of using mehndi before weddings. Mehndikirasmis held a couple of days before the nikah ceremony and is celebrated with a lot of pomp and honor. 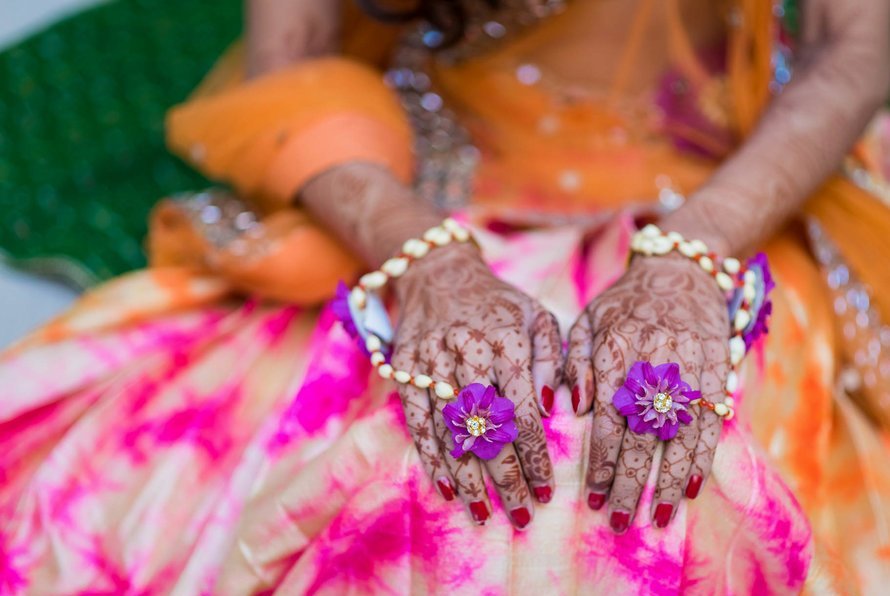 Mehndi
Over the centuries, mehndi has become so ingrained in Indian tradition that today the mehndi ceremony is one of the major celebrations before the wedding. A family member or mehndi expert applies mehndi on the palms and feet of the bride. Elaborate designs are applied on the hands with a cone filled with mehndi. While the mehndi is being applied, other members of the family play the traditional dhol and dance to its beats. Every female member of family gets mehndi done on her hands and feet. The entire mood of a mehndi ceremony is extremely festive.
The mehndi ceremony takes place at the bride’s place and usually, it is held a couple of days prior to the wedding. It is a night ceremony which is accompanied with relatives, music, laughter, food and a lot of fun. 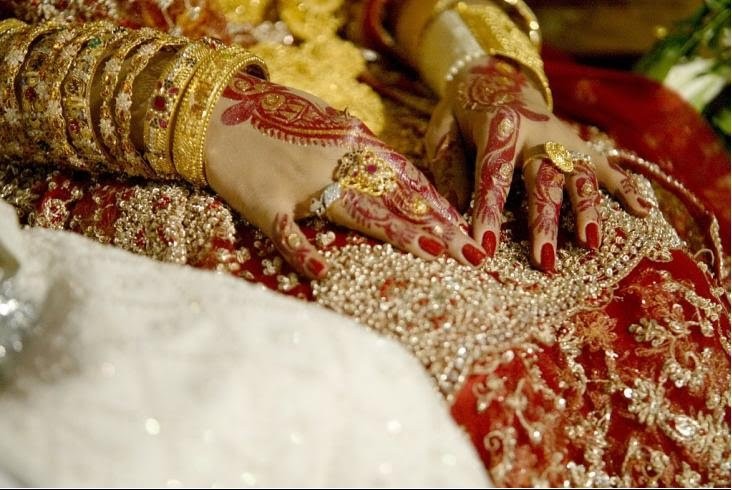 The mehndi ceremony for the groom takes place separately at his home. The bride and groom do not usually get decked up very elaborately at the time of the mehndi application, and their ensembles are very simple. Once the mehndi for the bride is done, the female relatives of the bride, especially her sisters, visit the groom’s ceremony. It is great fun as the would-be sister-in-laws play pranks on their future brother-in-law and try to get some money from him as a tradition! It is a very happy occasion for both the families. Traditional songs and music characterize the ceremony from the beginning to the end.
Present trends in mehndi
Although times have changed and a lot of new inclusions have been made in Indian weddings, the significance of the mehndi ceremony has grown in stature. Many families bring in DJs to play songs and celebrations that go on until late in the night. If something has changed about the ceremony, it is the designs and patterns. While only intricate Indian designs were traditionally applied in the past, brides today are experimenting with Arabic designs and Indo-Arabic designs and mixing shimmer pastes along with the traditional mehndi paste. Semi precious stones are also embedded in the design. It is traditional to write the name of the groom on the bride’s palm. In some regions, this is also a small ritual after the wedding. The groom is made to search for his name, which is usually smartly written so as not be readily visible.

The mehndi ceremony is a reflection of the rich Indian culture, bringing together the knowledge of medicinal herbs with many lovely sentiments and beliefs. The result is a ceremony filled with fun and joy and the perfect precursor to the auspicious wedding day.

TAGS: Party Celebrations
PREVIOUS POST ← Looking for Venues in Hyderabad? To Celebrate Farewell party.
NEXT POST Are You Looking For Venue To Conduct Recruitment →